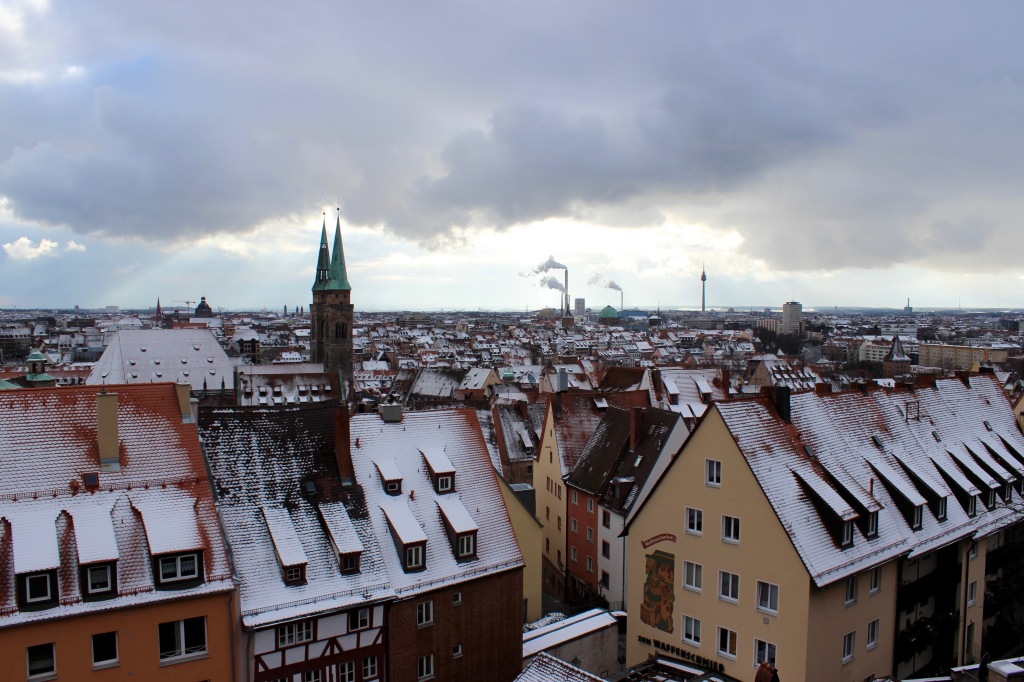 Embarking on an Adventure

It is impossible to accurately put into words just how incredible my semester abroad in Germany was, except to say I have gained a second home in Europe.

On January 15, senior Allie Herkenroder and I embarked on a three-month journey in Germany for the AMBEX (American Bavarian Exchange) semester. I had never flown before, let alone been outside of the United States We had no idea what to expect and barely knew each other. Here we were, with 14 students from colleges on the west coast, trying to figure out a new life together.

Everything was new. Picture New Student Orientation (NSO) week, but thousands of  miles across the ocean in Germany. Picture 15 people you’ve never met who you have to live and room with. Now, picture an unfamiliar culture, language and time difference. It was NSO on steroids.
The semester was structured in two week periods, the first week being orientation in Nürnberg. We then moved to Regensburg for the duration of the semester.
We had five two-week classes: Christian Worldview, Reformation Theology, Modern European Literature, Art History and German Culture and Geography. Following each two week class was either a free week to travel elsewhere in Europe (we had three of these), or an academic tour week (one was a Reformation tour through cities in Germany and the other was in Austria and Italy studying art). It sounds like a lot to do in three months—it was, but it was the adventure of a lifetime.
Exploring Europe
During the first of three independent travel weeks I went to Greece, where we climbed up to the Acropolis and took in the view of ancient Greek ruins paired with the panoramic view of the entire city of Athens. We ate a gyro a day and swam in a cave lake with tiny fish that tried to suck on our toes.
My second travel week was spent in Barcelona, Spain. We visited the Futbol Stadium and the locations of the Cheetah Girls 2 film: the natural history museum where I held colored pigeons, the fountain and Park Güell with mosaic benches.
Our final independent travel week was my favorite. It was the week of my birthday, which I spent in England and Ireland. We toured London in a single day. We awoke at 6:00 a.m. and saw the Sherlock Holmes Museum, Buckingham Palace, Big Ben and Westminster Abbey. We took a tour of the locations used in filming the Harry Potter movies– our tour guide dressed to look just like Hagrid. We finished the day by watching the musical “Wicked” at the Apollo Theater, my dream come true, and taking pictures at Platform 9¾ in King’s Cross Station.
We took a ferry over to Ireland for the rest of the week, staying in Dublin, Killarney and Galway. We stayed in both the countryside, with brilliant green grass and sheep, and in bustling cities. We visited the Cliffs of Moher, took meandering walks through the countryside and experienced the city life of street performers and Irish music while celebrating my birthday in Galway.
A New Home
We always returned home to Regensburg after our excursions. Living in Germany was like living in a storybook. Every cobblestone street, narrow alley and red-roofed building took us back in time to a history preserved tangibly in their culture. Regensburg is a quaint little town on the Danube River, with storybook Bavarian architecture, unmistakable red roofs, cathedrals and home to the royal Thurn and Taxis family living in their elaborate palace.
We lived in one wing of our Jungendherberge (hostel) in rooms that resembled standard dorms, except the windows didn’t have any screens.
On our trip we had 15 girls and one guy, so girls got to rotate roommates while poor Jonah was by himself.
Our classes took place in a conference room in our hostel down the hall from our rooms, and we would usually meet from 8:00 a.m. until lunchtime for class every day for two weeks. After lunch we had free time for the rest of the day to do “homework,” which meant explore the city.
Most days we would frequent cafes and listen to the locals converse while eating delectable pastries. In the winter, most of our exploring involved food. Bavarian pretzels, chocolate and gelato were staples every day. If we didn’t like the food at the hostel, our favorite meal
to grab was döner kebabs (pita stuffed with shaved meat, cabbage, cucumbers, onions and special sauce) and dürum (which is everything inside döner but stuffed into a wrap). Our spring explorations took us on walks down the river on paths lined with hundreds of wild flowers, or up the hill to a small chapel where we climbed into the largest tree I had ever seen. Every day was an adventure.
On one of our adventures at the ice skating rink I met my dear German friend, Maike. We were brought together by her longing to be back in America and my longing for a local friendship.
We skated and talked the entire night about our love of books, writing and cultural differences. Maike also attended Lifestream church where we went on Sundays, an independent “free” church which met in a bar. The congregation was so hospitable and friendly. Although the services were conducted in German, we were connected by our faith. Whether we sang in English or German, we were united in one language—God’s language. Regensburg will forever have a piece of my heart.